How does the OVC overcome polymerisation shrinkage?

byPeter McDonald
You are here:
< All Topics

In most cases, deep cavity defects are cured in layers using standard procedures before the OVC3 is placed.  Contraction issues related to the OVC3 technique are small since the C-factor is 1.  Any minor contraction issues are even further reduced by spot-curing the centre of the OVC3 first. By spot-curing the centre, any shrinkage can draw additional uncured composite from the surrounding uncured material, while very slightly pulling the crown towards the tooth.  This spot curing reduces internal stresses.  The final cure only cures the periphery of the OVC3 which can shrink inwards towards the centre.

Shrinkage concerns can be further ameliorated by light curing from the centre outwards using the spot-curing selector key in a circular motion, in gradually increasing circles, until the crown has cured.

The above indicates that shrinkage vectors are not a significant issue with the OVC3.

In contrast, large direct composite restorations, such as MODBL, have major issues with shrinkage because the C-factor is high, and the layering of composite causes internal stresses to build up.

Rhondium inhouse testing compared the micro-leakage of spot-curing the OVC3 followed by full occlusal curing, versus only full occlusal curing.  All restored teeth were subjected to 500 thermocycles  (5oC to 55oC) and then immersed in dye for 48 hours.  The teeth were then sectioned multiple times using a diamond saw mounted in a CNC machine.

These results are in the table below.

Interestingly, none of the OVC3 crowns in either group had any evidence of microleakage.  This is unusual as there are numerous microleakage studies of both indirect restorations and direct composite restorations in the literature that show some signs of micro-leakage.

The lack of microleakage is reassuring regarding both the bond strength and the resistance to secondary caries.

A typical example is shown below. 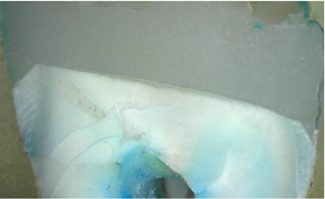 The OVC3 technique requires deep parts of the crown-prep (greater than 3mm from the occlusal surface) to be built up and cured before the OVC3 is placed.  Spot-curing the centre of the OVC3 is recommended to control shrinkage and simplify the clinical technique.  See Shrinkage issues above 1.5.

Rhondium inhouse testing has demonstrated that curing for 30 seconds with a curing light >1000 lumens/cm3 cures through the centre of the OVC3 to a depth of 3.4mm to 3.8mm (depending on the tooth-type). [Ref RHTR0111 L-OVC Spot Cure Depth]

The use of curing lights with less than 1000 lumens/cm3 is ineffective and strongly discouraged.

Next How long will OVC restorations last?
Table of Contents