A little while ago, we published the first part of a series, the aptly titled “Things You Should Know Before Buying an External Aerosol Capture System – Part 1.”

Since then we’ve been busy building and sending Rhondair units around the globe. We’ve also developed and released additional upgrades and modifications that are now standard with all units. Some of those additions were in part based on feedback from the fantastic people in our Early Adopter Program, and we’d like to thank everyone that’s contributed so far. 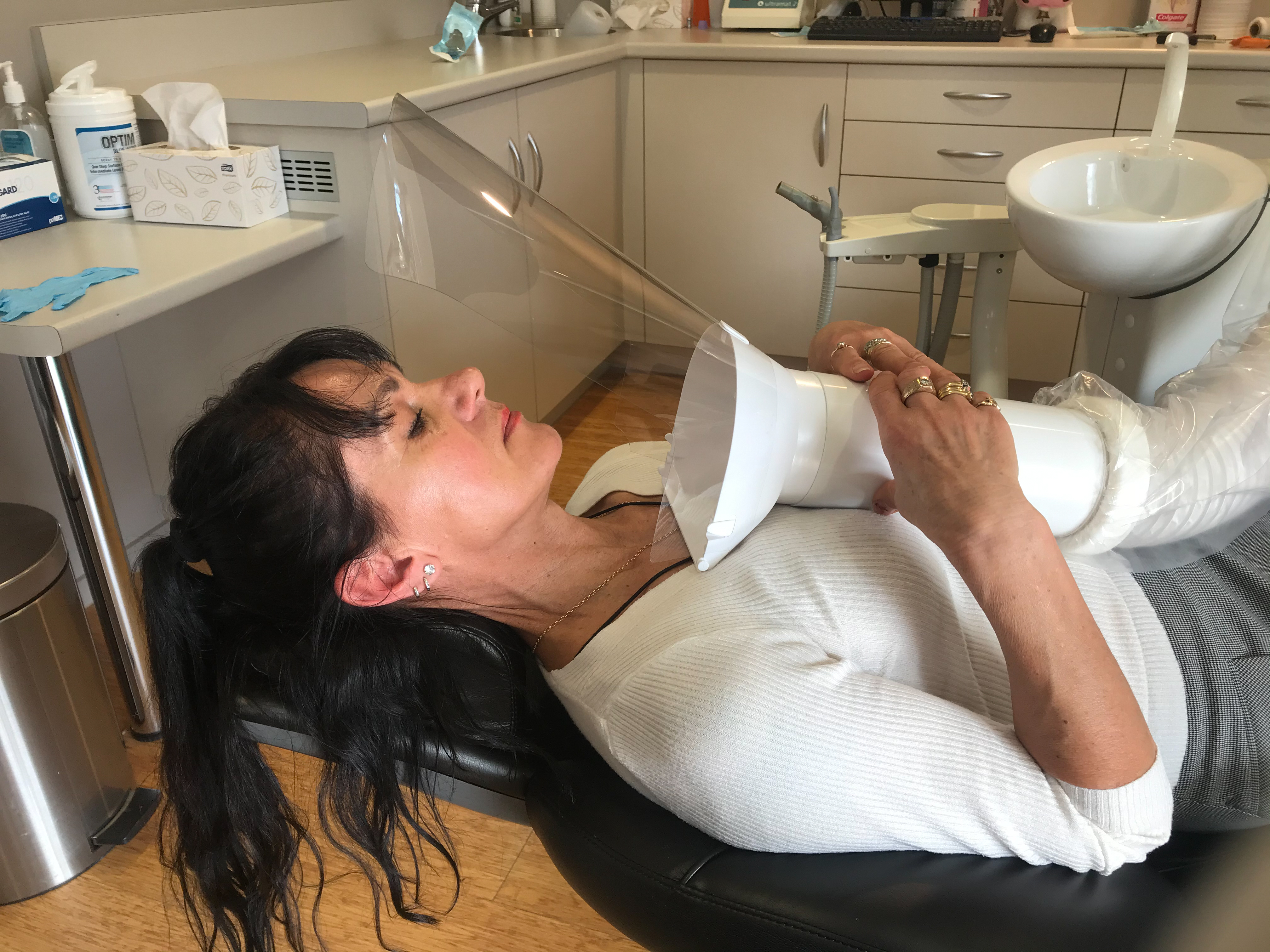 The Rhondair Patient Grip, a cleanable hand hold and the latest addition to the Rhondair system.

As the ongoing pandemic continues, hitting undesirable milestones like an official death toll of over 1 million, it’s more important than ever to stay vigilant and informed. So with that in mind, let’s dive into the next assortment of things you should know before buying an External Aerosol Capture System:

1. Using your HVE Line for Double Duty, or Why Less is Sometimes Just Less.

One of the main alternatives to a stand-alone aerosol capture system is to use a device that connects to an existing High-Volume Evacuation line.

It’s a tempting option for sure; they’re typically low-cost and require little extra equipment. The problem is that the HVE line already has a function: HVE. By splitting the line’s suction across two or more tools it can drastically lower the performance of HVE suction, which in turn reduces a patient’s comfort.

Further, unless you have an up-rated central suction unit, in some cases you can end up reducing the suction across the whole practice. With many practices these days having 5 or more chairs and hygienists wanting to use HVE lines at the same time, you might not be very popular. The other issue to keep in mind is that these types of extraction systems can become difficult to hold in the correct position throughout a procedure, and with the additional hose weight they can become tiresome to use after a while.

Just as a hammer isn’t the best tool for every job, sometimes it’s best to use a specialised solution for a specialised problem. Capture of dental splatter and aerosols is one of those times.

Our Rhondair unit has a hose diameter that is larger than many other options, and that’s no accident. Thanks to the Venturi effect, the diameter of a duct doesn’t particularly affect the flowrate of air passing through it, but it does change the velocity at which it moves. That is to say, a narrow duct and a wide duct of the same length will move essentially the same volume of air, all other things being equal, but the narrower duct will make more noise while doing it, as the air is moving through it faster.

When it comes to a device that is designed to run all day close to dental staff and patients, those extra decibels can make all the difference. Your staff will thank you for considering this one.

The most significant details for optimal duct operation by far are the length and direction of the ducting. That’s why we suggest trimming your ducting at the Rhondair base unit end (the end without the collar) so that it’s as short and straight as possible, while still reaching the patient and allowing for adjustment. Unnecessary bends and loops can all reduce performance. 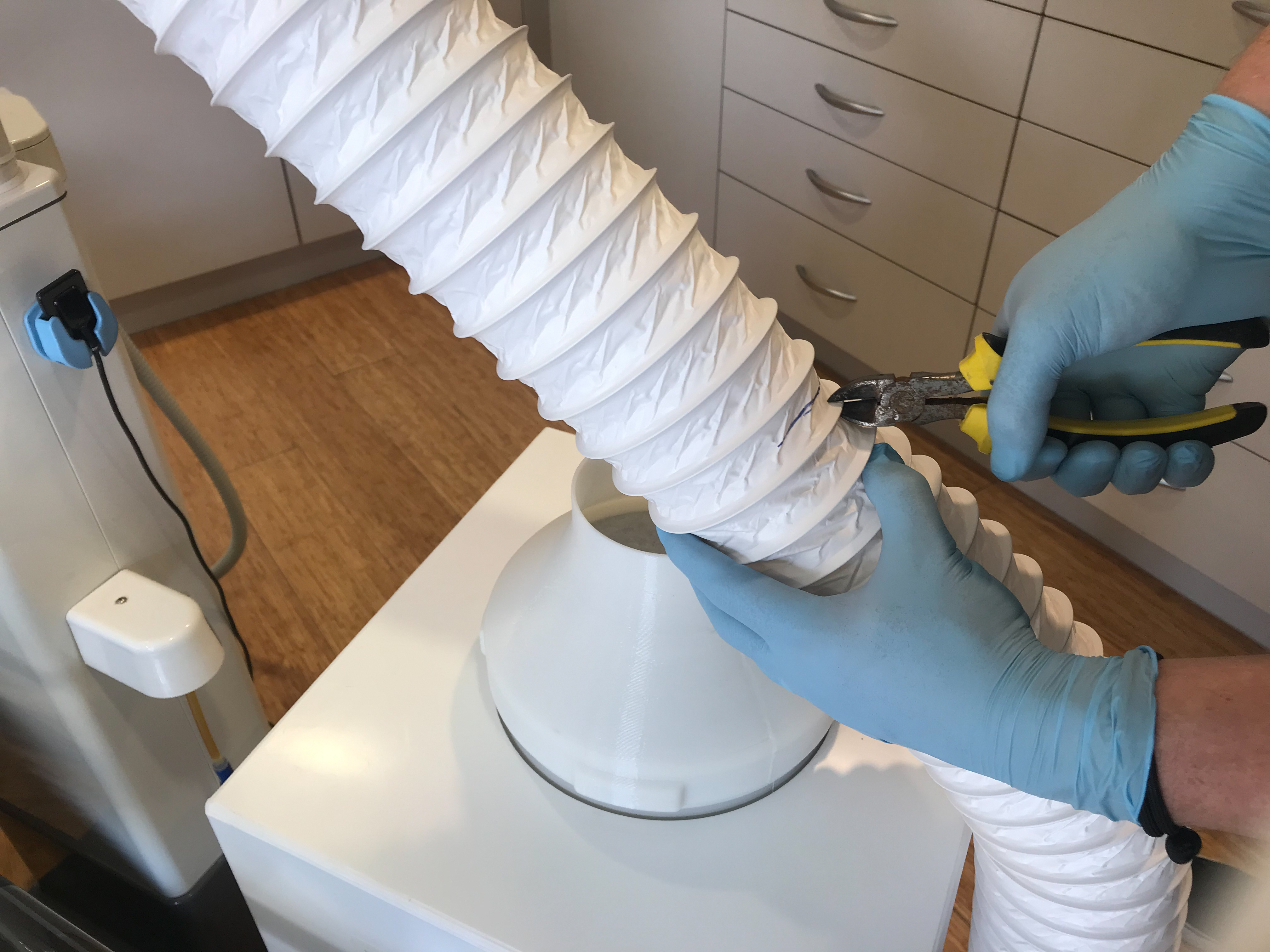 Trimming the duct to length.

Many publications, news agencies, and even some suppliers have incorrectly stated that HEPA filters are only effective down to 0.3 microns (μm).

At first glance that logic fits most people’s idea of a filter; filters capture particles above a certain size, with anything smaller passing through. However, NASA themselves tested HEPA filters back in in 2016 and confirmed that they are incredibly effective at capturing particles of all sizes, including below 0.3 microns, to near 100% effectiveness.

When particles are small enough, such as below 0.3 microns, their movement becomes affected by the individual atoms and molecules around them, including water molecules or the very air itself. This is known as Brownian Motion. These particles move in a random pattern, effectively ricocheting off other matter. Inside a HEPA filter, these particles move back and forth, contacting the filter fibres and getting captured in almost all instances possible.

This is a simulation of the Brownian motion of a big particle (dust particle) that collides with a large set of smaller particles (molecules of a gas) which move with different velocities in different random directions. – Wikipedia

4. UV Lights – Good for Raves, Less so for an Aerosol Capture Unit.

To effectively kill a virus with UV light, you need at minimum several seconds of direct UVC light. As aerosols travel through a capture unit they’ll diffuse randomly, meaning there’s almost a zero percent chance that they’ll end up obligingly sitting in place in a duct or on the outermost layer of a filter’s pleats for long enough to be destroyed.

The US Food and Drug Administration urges caution also:

So although a UV light might make you feel safer, in most instances it’s only a placebo.

Keep your questions coming and we might just see you for a Part 3 in the future.